Paws Up On Health

Just good things for your pet

Paws Up On Health LLCis the embodiment of our dreams and ideals to provide natural and organic foods, treats, supplements and products for our own dogs as well as to like-minded pet owners.

In 1998, we heard about a new feeding program called BARF (Bones and Raw Food) which led us to read everything we could get our hands on, and talk to anyone we could find who was feeding BARF to their dogs,  and there was very little information.  Then in late 1999, after losing one of our dogs to cancer, and in early 2000, with another dog diagnosed with auto-immune, we decided to make significant changes to our dogs’ lifestyle.   We began feeding our dogs a natural diet, utilizing holistic options along with conventional methods, minimizing vaccinations and exposure to unnatural products, all in order to provide them with better health. The dogs are doing great!!

Paws Up On Health’s mission statementis very clear “just good things for your pet”.  In keeping with that statement, we feature only natural products from ordinary to the exotic from well-established and highly respected companies.  As part of our commitment and high standards, we continuously research to provide our clients with the best natural products for their pets and best value for their money.

Donna Anderson has loved, trained and shown Golden Retrievers in Obedience since 1991 and in Agility since 1998.  She is a long time member of Golden Retriever Club of America, Garden State Golden Retriever Club,  Staten Island Companion Dog Training Club and now Skyline Agility  Club.   Donna has competed in national obedience tournaments.  She has voluntarily served as a Director with SIDCTC and GSGRC, and as an instructor with SICDTC and the former East Coast Dog Training Club.   Prior to Paws Up, Donna was a long time manager in the meat and deli departments of Pathmark Stores which afforded her valuable retail and product knowledge.  She also achieved the Food Safety Manager Certification from National Registry of Food Safety Professionals.  Her dogs to date are:

Diane Lange has been into dogs all of her life, as well horses, hamsters, gerbils, mice, turtles, and cats.  While growing up, she would bring home baby birds that she found had left the nest too early and even once hand raised 5 baby squirrels.

Diane has shown her American Eskimo dogs in Obedience since 1991 and in Agility since 1998.  Additionally she is currently learning about sheep herding with her Norwegian Buhunds.   Diane’s memberships have included the American Eskimo Dog Club of America, The Norwegian Buhund Club of America and Staten Island Companion Dog Training Club. Diane has volunteered her time as a Director and an Instructor at SICDTC, and also for American Eskimo Dog Rescue.  She has competed and placed in national obedience tournaments, with her dogs who have achieved national rankings.  From 1991-2000, Diane wrote a monthly column “Tri State Tails” for “Front & Finish”, a National Dog Performance newspaper.  Diane continues to improve upon her Agility skills and all of her dogs have achieved national rankings in this performance sport as well.  Diane is currently an Agility Instructor at Skyline Agility Club in Middletown, NY and available for private lessons in Pennsylvania.  Her dogs to date are:

Diane and Donna are longtime students of the “teaching the thinking dog” methods of professional dog trainer Diane Bauman author of “Beyond Basic Dog Training” and “All You Want to Know About Agility”.   Diane has also done sheep herding under the direction of Diane Sobel-Meyer of Outback Farms.   Karen Bowens of Silvermist brings out the champion in their dogs in the conformation ring.

2011 ended with Morgan earning her 19th QQ towards her MACH (Master Agility Championship) and Sookie debuting for the first time in AKC Agility earning placements in both Novice Jumpers and Novice Fast.

On January 12th, our grand dame of  17 years, Breyer was assisted across the bridge.   She was the wild child, and a true diva.  She excelled in Breed ring, earned her Utility title in Obedience, but her true love was Agility.   Her ears would click back, body would lengthen and off she would go.

In March, Morgan and I had a classic totally in sync run to finish her MACH.   Later in September, Morgan finished her USDAA MAD title another huge accomplishment.  Morgan was again #1 AKC Agility Norwegian Buhund, and was again invited to 2012 AKC Invitationals.

Sookie started off the year with a bang…with limited showing finished her Novice and Open Jumpers titles, and her Novice, Open and
Excellent FAST titles.   In October at the only breed show cluster entered for the year, she took a Best of Breed, a Select and a Best of Opposite earning three 5 point majors and completing requirements towards her Grand Championship in one weekend!!!

Jamie is working on her Masters Jumpers and Standard titles and is one qualifier title short of her USDAA AAD.  She continues as the over achiever retriever, but enjoys her new job checking the yard perimeter and visiting nearby friends with ponds to swim in.

Another huge change was that we moved from our beloved NY to rural NEPA.  It was stressful, scary and exciting all at the same time, Diane having lived in Staten Island all her life and Donna the past 20 years.  So we packed (and packed…) and moved our possessions and memories.   They said there would be some culture shock (there was..)  but  we continue to explore our new  locale,  which feels more and more like home.

Having lived with three of American Eskimos…Delilah, Breyer and Chase, it  was tough not to have another.   Two years ago there was an owner surrendered Eskie to the Brooklyn CACC with instructions to euthanize and Eskie rescue agreed.   He was the worst  case they had ever seen.   But Kris Seiter, who has worked with many rescues, took him home,  rehabbed him for 2 years and then felt he was ready to move on to his forever home.   That is how Sparqy joined the pack in August 2012.

Morgan managed to retain her #1 AKC Agility Norwegian Buhund title for the third consecutive year and we finally made the trip to the AKC Agility Invitationals.   We qualified all four rounds but only ran clean for 3. Morgan was awarded top Norwegian Buhund 2013.  We continued the quest for MACH2.

Sookie started out in Standard and finished her Novice and Open titles with ease.  With her in both Excellent levels, we started coming together as team in the fall.   Sookie showed in confirmation at the prestigious Eukanuba National Championship and was awarded Select for another 3 point major towards her Grand Championship.

The dogs, in addition to their training and showing schedule, are also responsible for taste testing and rating products with their "paws up" method. Some products we have noticed they keep requesting to re-test…hmmm… 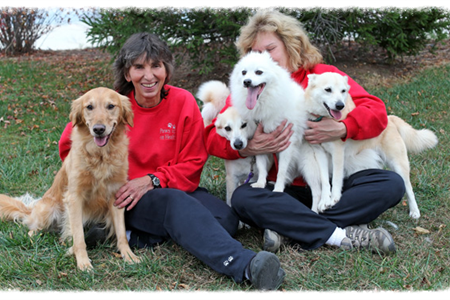 ​So it is safe to say that our lives have gone to the  dogs... and we could not be happier...

It is a personal commitment, an educated choice and responsibility to decide how to care, feed and support your pet. Paws Up On Health LLC offers alternatives and suggestions, which are not substitutes for professional vet care.